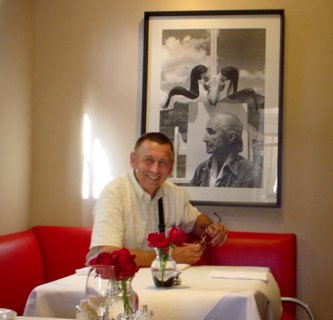 In 1949, I watched my dad take photos with a Leica IIIa on the troop transport ship USS General Ballou, when we emigrated to the USA, being DPs (Displaced Persons) originally from Estonia (south of Finland). When we arrived in New York and my dad went to take out the film, he sadly discovered that the film had NOT advanced! There were no photos of our journey. :-( The camera was sold a few months later to raise cash for a down payment on a 50 acre farmette. It was some 25 years later that I was fortunately able to acquire a copy of the same model Leica.

Within a year or so, my mother gave me a little, black plastic Baby Brownie Kodak, with which I photographed our sheep, cat, house, and my wind-up 1/16 scale early 1950's Studebaker car. Happily, I still have those first photos.

In the mid 50's, while in high school I became seriously interested in photography, bought a 35mm Minolta A, and taught myself to do darkroom work. Not being able to do "telephoto" shots or close-ups, and not having the funds to buy an appropriate camera, I set out to make my own - of sorts. I acquired on the used photo market a 1930's Voigtlander 9 x 12 cm sheet film camera, and an old Kodak 35. I disassembled and removed the Kodak's lens/rangefinder assembly and mounted the body onto a Voigtlander sheet film holder. This gave me 35mm roll film capability that I could attach to the Voigtlander. Using another film holder I built an equivalent distance ground glass focusing unit. The focal length of the Voigtlander lens was around 135mm so now I could do "telephoto" work, but only on a tripod, of course. Furthermore with the bellows extension available on the Voigtlander I could now do macro work with the same lens. I was thrilled!

College and graduate school kept my photographic activity at a low level, but I really grooved on photo books by Ansel Adams, Edward Weston, the Newhalls and Sarkovski, becoming quite indoctrinated into the photo culture of the times. I did do some economical color slide photography with a half frame 35mm Mercury? camera and did darkroom work, mostly B&W.   I experienced the days of excruciatingly demanding color printing, where I spent $25 (yes in 1960 dollars) for chemicals, and spent one evening mixing them. The next night, with careful temperature control on chemicals with water baths, I would make a few test strips using color correcting gel filters. The processing, each time, was so slow that there might only be time to make one color print or possibly a second one that night. Then it was time for bed and the chemicals needed to be discarded because they would not keep. A few times of that was enough. Back to B&W.

After obtaining my degrees, in physics and electrical engineering, I had the opportunity to travel around the world with a two year stop in Thailand, doing engineering work. On my way there I purchased a new SLR in Tokyo, the original Nikon F and three lenses, 35, 50, and 135mm. I was now actively engaged with travel photography, all still in B&W, and doing my own developing and printing in our Bangkok house's bathroom.

On returning to the USA I joined the faculty of Franklin Pierce College, built a darkroom in an out-cabin on our little private island (a very lucky purchase), and thoroughly enjoyed the hobby. I was now making 6.75 x 10 inch prints (approximate 35mm aspect ratio) for display, and matted them on 10x12 inch board.

Five years later, having joined The Hopkins University Applied Physics Laboratory, I was able to build a real darkroom and printed seriously. I joined the Chesapeake Antiquarian Photographic Society (now, recently renamed Maryland Photographic Society) and became an avid camera and lens collector. This gave me the opportunity to acquire and use cameras from 8x10 inch view cameras down to miniature. I definitely considered myself of the Ansel Adams school of photography, although I felt I compromised a lot, for efficiency's sake, in doing much 35mm work. Things were delightfully stable for decades. I just pursued photography for my own satisfaction.

When the digital photography revolution burst on the scene I waited a few years and then acquired a 2 megapixel camera. I realized full well that even the 35mm film I was so fond of (but considered marginal on resolution - compared to the 8x10 film images) was far superior to the digicam. But, I wanted to become culturally literate, so I gave it a try. Little did I realize what would happen, and so rapidly.

I was amazed by what beautiful work I could do with minimal pixel images! How could that be? Well, I thought to myself: Consider how big Van Gogh's, Picasso's or Rembrandt's brush "pixels" are and how few of those "pixels" there are on the canvas, yet their work is much admired.   So, resolution isn't everything. It was quite a revelation! And, I've stayed with that view. Also, I was delighted, surprised, even overwhelmed by the power of much greater control over my images for printing, as well as the ease of making prints without a wet darkroom. Somewhat to my chagrin and dismay I realize that I have ceased using film and all the wonderful film cameras that I own. What a revolution.

Recently, due to a good friend's marvelous skills, and kindness, I'm able to show my photographs to you, the public. This is a new adventure. Enjoy the photos! And, I hope you are touched enough to comment.

Thank you for visiting my galleries!

Please feel free to interact with me using the email address below: